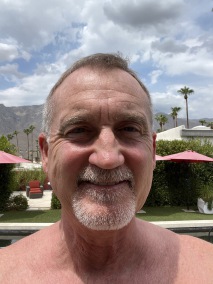 Who Is This Guy?

Once Upon A Time

I remember being fascinated with pens at an early age.  That was just about the time I learned how to write in cursive.  The fact that a pen would put a permanent mark on a page, as opposed to a pencil, which could be erased, was intriguing.  I sought to make sure that what I wrote would be permanent and legible.

Fourth grade was a pivotal period in my young life. I was enrolled in one of those experimental 'open concept' schools that year.  Although they were a failed educational experiment nationwide, the concept worked on me like no other grade before or after.   I took my first Spanish class then.  It stuck.  I read my first SF book then. It's a genre that I still read and can't get enough of.  I learned how to read a map.  That came in very handy once I became a Boy Scout.  To this day I have a fascination with maps. We did those SRA Reading Labs modules that year, too.  Boy, was I hooked on reading because of them.  I wrote my first imaginative story. My life was never the same when I realized that my imagination was restless, was overflowing, and needed a voice.

I started out writing one page creative stories that had little audience (they were very imaginative, but extremely childish). In 6th grade I wrote a stage play and acted in it, too.  I didn't take to acting but my imagination was on fire.  Shortly after my 15th birthday the poetry Muse visited and refused to leave.  She stayed with me for over 20 years.  I ended up writing 15 volumes of poems (count 'em: hundreds).  In high school I co-wrote a play, again which I acted in.  I was also the co-editor of, and contributor to, a student creative writing anthology which sold out.  Although poetry was my main creative outlet for years, always in the back of my mind a couple of novel-length ideas were incubating.

Despite the fact that I had an imagination that wouldn't quit, I wasn't particularly encouraged to write.  Some people have the luxury of supportive relatives.  I didn't.  If you're one of those people be thankful for that!  For encouragement I turned to my creative friends (mostly musicians) who I felt were gods.  Some of them knew that one day I would write the novels I knew were inside me.

I eventually went off to college. Thinking that I had to be practical, I majored in business with an emphasis on technology.  I got into the wonderful world of computer networking and ultimately became a Microsoft Certified Systems Engineer (MCSE).  Spurred into action by a random conversation with an IT co-worker back in 2000, I wondered why I had let my novel ideas languish.  Just a few days later I launched Microsoft Word and went to work (I eventually used Storymill as I migrated exclusively to Macs).  It was as if the floodgates had opened.  I had waited so long, had squashed my need to write for way too many decades, that the stories started pouring out.

Note: in 2016, I updated nearly all of my novels to '2nd Edition'. Amazon still shows some links with old covers. So, if your copy arrives with a diff cover it's because you have the new version.

My  first offering, called Desert Sons is a work of contemporary fiction.  Actually, I didn't start out to write that novel.  I had every intention of first writing a science fiction story. And the sci fi story was the first one that came gushing out.  But after that manuscript was completed I realized it didn't have the necessary elements to make a good story.  After all, it was my first attempt at this endeavor.  With that story languishing, Desert Sons popped up and asked to be written out of the clear blue.  I was the first person to be surprised.  I didn't read all that much contemporary fiction, and was sure I couldn't contribute to that genre.  Yet, the Muse wasn't to be trifled with.  The story practically wrote itself.

Almost as soon as it was published reader response started coming in.  It was overwhelming.  I had no idea that my two boys would touch so many people – men, as well as women.  Never in my wildest imagination (and it's pretty wild) did I think it would become a bestseller either (which it did).

I was sure Scott and Ryan's story had ended.  But readers demanded more.

Little did I know that the characters (some old, some new) were still talking.  I listened and started writing down what they told me. So, the sequel is called Into This World We’re Thrown.  Again, it became a bestseller.  Really.  I swear I had no idea it would happen again.  For those of you out there who have begged, cajoled, demanded, and hinted for a third installment in this series, please be patient.  The characters have ceased talking for the time being, I went on to write another series altogether, and to tell the truth it's going to be difficult to find more conflict for Scott and Ryan to overcome.  I hadn't intended to write a soap opera anyway.

My husband and I have been science fiction fans since we were kids.  We know lots of other gay people who are scifi fans, too.  One of the things we've all been disappointed in is the near lack of gay characters in popular science fiction.  The only real exception is Torchwood.  Come on now.  Do you really expect our entire community to believe that alternate worlds, parallel worlds, and worlds of the near and far future would have nearly NO gay people in them?

I set out to fix that.

Stealing Some Time is a two volume time-travel, adventure/romance featuring a whole host of gay characters--two early 20s protagonists in particular. Set in the 25th century on Earth, one of my protagonists goes back to the 19th century and falls in love with a guy he meets there.  This story won a literary award, too.  It doesn't get any better than that!

The Rylerran Gateway heads deeply into space opera territory.  Combining elements from several sub-genres of scifi, it was a real treat to flesh out this story.  It is first and foremost a work of pure science fiction.  My two boys go on the most amazing inter-dimensional adventure you've ever read.

Trenekis of Hiera is an attempt to fulfill readers’ wishes for another installment of Desert Sons.  Altho it is in no way a third installment, it blends similar elements.  The ages of the main characters is just slightly older than in Desert Sons, the angst felt by Scott and Ryan is similar.  The environment is similar.  But the similarities end there.  It is a full-fledged sci-fi story that has gay main characters and a hopeful message.

My latest offer is Suddenly Solid.  It's available in print and on Kindle.

As of 2019, my writing days have ended. After decades of poems, short stories, plays, songs and novels I'm a full time artist. My medium is acrylics, oils, graphite, colored pencils, and pen/ink. I enjoy drawing and painting.