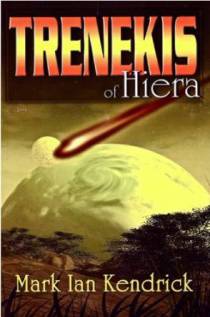 Arasen Vatch, the leader of a fanatical religious order known as the Path Holders, rose to power on Eridanus Colony in 2757 CE.  Tens of thousands died when loyalists committed a heinous act of terrorism.  Arasen fled in cold sleep hibernation with his closest followers. No one knew he had led them to a faraway star system and founded a new settlement, dedicated to his ‘Path of Perfection’.  Yet, years later, an inevitable schism occurred.

Nineteen-year-old Trenekis Idero lives in the heretical village of Hiera.  Brought there as an infant, he has only recently been told he’s Arasen’s son.  Knowing this, he dares not tell anyone he’s gay.

Niko Savaidras and his planetary exploration team discover Arasen’s long lost destination.  Niko, who is also gay, is unaware that he will soon be intimately involved with the son of a notorious mass murderer.  Trenekis has no idea this will solve multiple problems he faces.

But the Path Holders are watching and they intend to keep their isolated planet a secret, even if everyone has to die.

This novel is available in print and ebook formats.