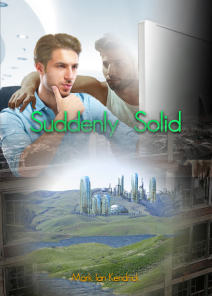 Image created by Eduardo Carriazo for this novel.

When I discovered Jacque Fresco and The Venus Project I became so fascinated with it that I had to incorporate his basic concepts into this story.

It is 2393 CE. Alik Senquero is an archeologist from the city-state of Skygate. A century ago, Skygate rose from the ruins of our civilization, which mysteriously collapsed in 2057. It’s an event known as The Fall in Alik’s time, yet one knows how it happened. Alik is working with a researcher who built a unique holo-projection device that allows one to view past events.  Their goal is to discover why it happened.  Alik’s imagination is on fire. This new technology could revolutionize the field of archeology.  He and his small team view the weeks that led up to The Fall in an attempt to piece it together.  But something goes terribly wrong.  Instead of just watching events unfold, he’s somehow dropped right into them and unable to return to his time. There, Alik encounters Jace Acamar, the son of a powerful US senator. Jace literally has Alik’s life in his hands. Can Alik convince Jace who he is and help him find a way to return to the future before he witnesses civilization’s end first hand?

Purchase this novel in Kindle format.